skip to main | skip to sidebar

During the 15 day waiting period we are finding fun things to do with Quinn at the Babyhouse and keeping occupied around town. Today the weather warmed up enough for us to go on a little driving tour. Tomorrow is November 15th and Dan's birthday as well as Quinn's 9th month birthday. Quinn will be measured and weighed. We think he's really grown. For example, he is starting to get a baby belly. He also seems much longer. 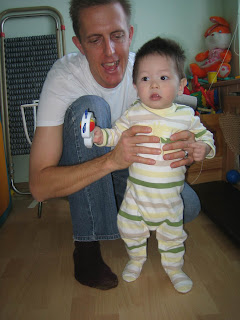 Dan helps Quinn walk or Quinn helps Dan kneel? Quinn took a break from teething the last 2 days and has been a chipper little guy. He crawled around the floor a lot and enjoyed watching some younger girls play. 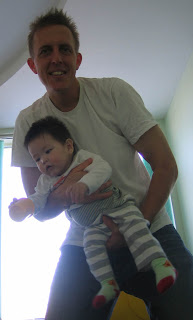 Quinn looking long as his little belly sticks out. 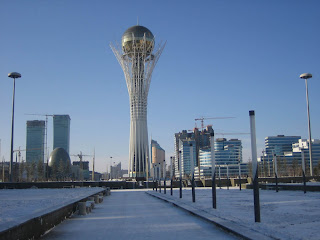 We took advantage of the blue sky day and toured the Astana-Baiterek Tower. "According to a folk legend, Baiterek is a magic tree found by the hero Yer-Tostik after his long wanderings. In the branches of this world's tree of life once in a year the bird Samruk laid its golden egg. The tower represents a stylishly designed tree with a huge egg-dome. The height of the tower is 97 meters (for it was in 1997 when Astana became the capital of the country)." (taken from Astana website) 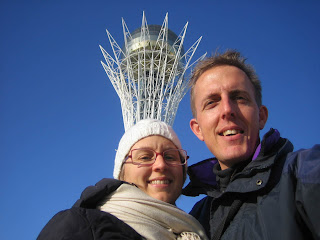 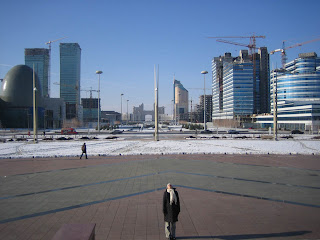 Kerry looks up at the nest while Santa (aka Father Frost) walks in the background soliciting photo opportunities. From the lookout Dan counted 134 construction cranes! 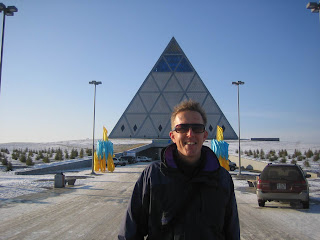 We poked around the concert hall/convention center designed by Sir Norman Foster. (Tonight Verdi's Opera, Aida is performing to a sold out audience). At night we see the pyramid's LED lights change color from our apartment. Many well known architects have been integral in the planning of the new Astana.

According to Astana time, it is officially Dan's birthday!!!!!!!!!!Let's hear a drum roll, trumpets blaring, Alissa singing, tambura's struming as we sing " "Happy Birthday to Dear Dan".
It would be fun to see Quinn's eyes light up when he sees cake and candles. We can tell that Quinn has been in a growth spurt.
What a wonderful way to celebrate
your birthday with your 2 buddies with you.
We love you with all of our heart. We wish you tons of good health,and tons of fun with Kerry and Quinn.
love
mother barb and pops karl

Dana shared your blog with me. A cute little guy! Congrats... almost there!

The weather there looks worse than in GRR... it is almost like "winter training"

Dear Kerry, Dan and Quinn:
You already are awake this November 15 (Happy Birthday Dan!)and we are close to winding up our day knowing that we will within a few hours leave to see Adam and Alissa.
Remember Thanksgiving 04?
sunny. shorts. flowers. warm.
A2's washer-dryer. eating outside on their back porch. walking along lake ponchatrain?
Now most of that will happen on Red Oak Lane.
Kerry/Dan: notify your companies to invest in Astana. It looks very hip-hop.
love
mother barb and pops karl

Yeah a new update. He is getting cuter and cuter each post. Happy Birthday to Dan.

Glad that the weather is a little nicer.

Happy Birthday Dan!!
We hope you were able to have a special birthday treat from the bakery. And 9 months for Quinn too! We can't wait to hear what fun things you may have done.
Take Care. Love,
The Burgs

It is so awesome to finally meet Quin! Amazing what cyberspace can allow us to do. Thank you for allowing us to join you on this journey - and what an amazing journey it is! You have so much to share and we are grateful to be able to share it with you. Your stories and photos are inspirational and we can sense just how happy you are. Can't wait to get the boys to the beach this summer - I am sure that Van and Beckett will be happy to help teach Quin the ropes! Hugs to all of you and love from Seattle!
Les and co.

Happy Birthday Dan!!
We had a touch of snow today. It's pretty cold but not near what you have there in Astana. Did you get my emails from this week? I'm gathering Schroeders to have Thanksgiving here at our house. Love you all! Heather

Happy Birthday Dan! It is getitng colder here in MI and we are all preparing for what is to come... although, it looks like you both already are! Quinn is so cute, and he looks like he is getting bigger! You must be providing him lots of love!

dearest kerry and Dan,
It is about 2:00 am here and as always I wonder what you are up to? hanging with QT, hitting the town or working on endless paper work?
QT's latest picts. are awesome I am a big fan of his hair.
Happy belated birthday DAn.

love you guys
a

Over the river and through the woods, Quinn. Soon you will be at grandma's house. Happy Turkey Day. Happy decorating the appartment in Astana, Kerry. Happy memories of past family
Thanksgivings which Quinn will now be a part of. Sretan Put dear ones. Count down time! Aunty

Happy Belated from Portage. We are doing our Thanksgiving on Sunday (tomorrow) as Frank leaves for Angola on Tuesday. Love you all...
I,B,B,M,E,F and Tater 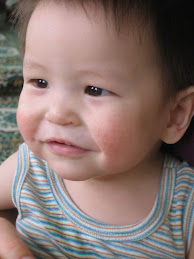